"The moon was speckled like a bird's egg. It hung reliably in the blackness above Will Turnbull and Nessa Grier who sat side by side on a bench as the leaves fell around them, landing softly on the thick, wet grass. Their knees were just touching, hearts pounding hard.'
Nessa Bruce waits for her husband to come through the double doors. She'd waited for him to return home from Afghanistan for what felt like forever, and now the moment was finally here. But Jake isn't... Jake Bruce hasn't come home, and it looks like he never will.
Nessa's life - and that of her daughter Poppy - is turned upside down in an instant. What has happened to the elusive man at the centre of their world? They hold onto the hope that he is still out there somewhere, alive... but as time passes by, Nessa is forced to look at her life, at the decisions she has made and the secrets she has kept. For maybe somewhere within it all lies the answer to the question she's desperate to answer - where is the man she loves?" 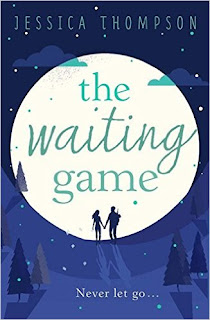 At first glance The Waiting Game just looked like another chick-lit book until I began reading. Slightly darker than the usual chick-lit genre, it focusses on Nessa and Poppy, a mother and daughter who are waiting for their husband/father to return from Afghanistan when he simply does not re-appear.
It is a fairly emotional read, and I did find myself becoming quite attached to Nessa - in the beginning I thought she was perhaps a little bit of a weed, a bit girly, but she seemed to toughen up as the story line went on and I really liked her by the end. All the characters are quite easy to relate to, even the unpleasant ones (I really didn't like Poppy, or her attitude but then she is a teenager, so the attitude was pretty accurate!) and I found myself willing things to turn out OK for Nessa.
The only thing that I did find distracting was that there were a few glaring errors in relation to timelines and ages - the book begins in 1997 and states that Jake is 18, then further on states that he was born in 1981 - therefore not 18 in 1997 (from someone who was 18 in 1997!) - a minor distraction and one that can be easily rectified.
In all, an enjoyable read and not at all the light, fluffy, chick lit I was expecting.
The Waiting Game is out now and you can get it here:
www.amazon.co.uk
Read on for an exclusive extract of The Waiting Game…
"Nessa’s heart was pounding in her chest. All she could do was hold the envelope in her trembling hands, turning it round, over and over again, to double check it hadn’t already been opened, that it wasn’t an old one that had been misplaced. That would be so disappointing. But it was unlikely; she always kept them in her drawer . . .
Nessa studied the envelope. It was almost just like all the others, but something was different. Something was missing. And why had it been left beneath the doormat anyway? That made no sense at all. Nessa frantically opened the drawer by her bed and found the others. She laid a couple out on the bed and studied them. The rest had an airmail stamp on them. That was the difference; this one didn’t . . .
So what did that mean? And why would a postman put the letter under the mat? Perhaps there was an Amazon parcel stuck in the letterbox . . . That happened sometimes. She couldn’t believe she’d missed it. It broke her heart to think that it was just lying there unopened for god-knows-how-long.
Nessa tore open the envelope and tipped it upside down. A photograph slid out and landed on the white cotton sheets. She didn’t recognise it at first, her eyes blurred with fresh tears. She turned the image upside down and blinked. It was the strangest thing: a photo of Jake – just Jake.
It was a recent one. He looked like he was lying down on a dust sheet or something, and he was wearing his uniform. The sunlight and the dusty haze of it gave her the impression it had been taken in Camp Bastion, although it could have been taken in any number of places. He had the strangest look on his face. His eyes were red and tired, as if he had been upset, or he hadn’t slept for a long time. There was a look of desperate sadness on his face. And yet somehow, despite this, there was so much love in his eyes. It was the strangest thing. Nessa simply couldn’t work out if it was the most heartbreaking, or the most hopeful thing she’d ever seen.
Despite his tiredness, he looked even more beautiful than she remembered him. The pictures he’d sent over the years were always pre-existing images. Photos they had treasured for years, even. This was new and he wasn’t the type to take photos of himself . . . What did this mean?
Nessa turned it over gently, expecting it to just have the usual photo number scrawled on the back and nothing else, but there was more. Words: I’ll be watching over you . . . always . . . I’m so sorry I had to leave . . .
Oh god, Nessa thought, raising a hand to her mouth. He’s gone . . .
He’s gone . . . "

*My thanks to the publisher for my ARC**
Posted by That Farm Girl at 03:23