Names of the Dead - Mark Leggatt

"Connor Montrose is running for his life. All that he held dear has been ripped away. Every Western intelligence agency and all the police forces of Europe are looking for him, with orders to shoot on sight. The only man who can prove his innocence, is the man that most wants him dead. Only one woman, a Mossad sleeper in Paris, will stand by his side.With her help, he must now turn and fight. His journey of evasion and revenge take him from hidden Holocaust bank vaults in Zurich, to the stinking sewers of Paris and dust-choked souks of Morocco. Finally, in the back streets of Tehran, under the gaze of the Ayatollahs, he has the chance to end it, as it began. In blood. This gripping high concept thriller will delight fans of Lee Child and James Patterson." 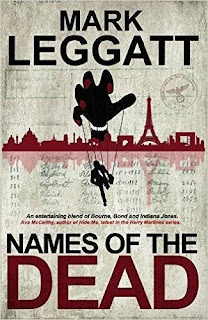 I cannot tell you how much I enjoyed this book - it's somewhere along the lines of a Bourne Identity/Da Vinci Code mash-up, so if you like that kind of thing, you'll love this.
The plot is well-written and very, very fast-paced, with heaps and heaps of tension. Connor Montrose is a very likeable character but he seem to get caught and then escape quite a lot - I loved this element of the storyline, especially as it doesn't always seem clear cut as to how he is going to get himself out of things each time. The characters are unreliable - Connor doesn't know who he can trust, and that in turn passes down to the reader meaning that I wasn't sure who was going to kick Connor's arse and who was on his side - another brilliant way of ramping up the tension.
This would made a brilliant movie, if the storyline is followed accurately. Lots and lots of action, shooting, running about and escaping, all things that kept me hooked to the pages and would no doubt keep me hooked to the big screen. I am definitely looking forward to more from Mark Leggatt.

Names of the Dead is out now and you can get it here:

**My thanks to the author for my review copy**