In a week-long blitz of lovely Linsdey Davis bookish posts, I am hosting an article by Lindsey on characterisation, with an introduction to Marcus Didio Falco....

Marcus Didius Falco was the beloved main character that you started with, and he saw you through many of the books. Flavia Albia took over from Falco – and the new one is the fourth in the series. Was it difficult to say goodbye to Falco as a main character? Why did you make the change? How was Flavia greeted by fans? How is Flavia developing as a character – has her life changed much in the four books so far?

Falco was wonderful and I don’t feel I’ve said goodbye to him. I am now just showing him not through his own, deeply biased, eyes, but as other people see him, specifically his children, Albia and also (in The Spook Who Spoke Again) the strange little lad Postumus. It gives Falco and Helena another dimension. Other old friends are also in the Albia series, 12 years older and grizzlier, and so are well-loved places such as Fountain Court, which Falco owns and is now trying to pass off as a good investment to the future Emperor Trajan.
I made the change to refresh everyone – me, readers, and the characters themselves. (I also had a film company interested, who wanted ‘spin-off’ rights – and I was damn well not going to let them choose what any spin-off would be.)
Fans were at first resistant, which does sadden me because I would have hoped they would trust me by now! However, they seem to have settled down and to their own amazement they like Albia as much as Falco.
As I did with Falco in The Silver Pigs, the first Albia Story, The Ides of April, turned out to occur at what would be a turning point in her personal life; she meets a man who scrubs up rather nicely and who is not in awe of her. We surely know where that is heading (well, I think we do, though readers can be oddly uncertain) By the second book his utter decency becomes apparent, and so on… In the fourth story the sub-plot concerns their wedding (many stories are about marriage but I hadn’t shown an actual wedding since the spectacular debâcle of Lenia and Smaractus in Time to Depart, where the bridal bed ends up on fire) There will be a blip or two at Albia’s wedding, which I shall not give away here, but ultimately as they set up home together (hampered by their hopeless slave Dromo) I am now going to explore the idea of the Roman family business. Albia will be informing yet also helping Tiberius set himself up as a building contractor. They will talk about things together, but he will leave her to it. I want to show that whatever the textbooks say, for most Romans the couple worked together for their own prosperity. 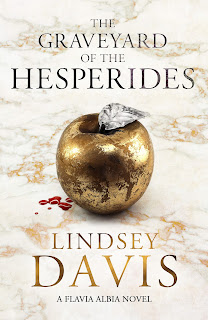 The Graveyard of the Hesperides is out now and you can get it here:

**Thanks to the author and publisher**